Despite the gap of 340 years, a walk through London today can give you a very real sense of the scale and nature of Samuel Pepys’s world in a way that can genuinely bring his diaries to life. His daily world stretched from Westminster Hall in the south west to the Tower in the east. When he didn’t travel by water, he would walk a regular route up King St (now Whitehall), turning right at Charing Cross, following the Strand and Fleet, past St Paul’s Cathedral and on his way past London Bridge on his right to Seething Lane. While few buildings from his time remain, many of the landmarks (particularly churches) and most of the streets remain in name, if not in timber and stone. By walking in the footsteps of Samuel Pepys, a clear footprint of his world can be discerned.

Westminster remains the home of Parliament with the original Westminster Hall, Westminster Abbey and St Margaret’s Church (where Pepys and Earl of Sandwich were both married) still in existence. Whitehall is still a formal thoroughfare of Government, with the Banqueting House, the last remaining part of Whitehall Palace and the site of Charles I’s execution, still an imposing building. The Strand and Fleet Street, to this day, remain a hectic mix of four and five storey buildings, the streets busy with pedestrians rushing between office and café and between shop and tavern. Even the traffic, dominated today by buses and taxis, appears to reflect a distant clamour of hackney carriages, horses and carts. The scale is defined by the absence of skyscrapers in this part of London, and with road widths and building heights very much what they were in the 1660s. And finally, St Paul’s, though not the building of the 1660s, remains a key landmark. The feeling of uniformity through time fades as you travel east of St Paul’s where the modern financial centre of the City is dominated by impersonal mirrored office blocks and towers.

On the route between Westminster and St Paul’s, Fleet Street was particularly significant and familiar to Pepys, forming a very central part in his life. He was born in Salisbury Court, a side street. When travelling along Fleet Street, on business or returning from a social event, he would stop at one of the many taverns1 for a draught of ale or a meal and often call in on his parents, still in Salisbury Court in the 1660s. 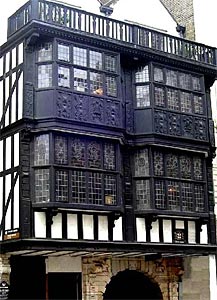 There are few buildings remaining that Pepys would have looked upon with his own eyes, but 17 Fleet Street is one he would have visited. Built in 1610, it is believed that the elder son of James I, Prince Henry (who died of illness in 1612, leaving the future Charles I as heir) used the first floor room as a Council Chamber. The building was originally the Prince’s Arms tavern, but was renamed as the Fountain sometime during the 17th century, probably about 16402. The first floor room is now known as Prince Henry’s Room, housing a Pepys memorabilia museum run by the Samuel Pepys Club3.

There are a few references to a ‘Fountain’ tavern in the Diary4:

Captain Ferrers and I walked abroad to several places, among others to Mr. Pim’s, my Lord’s Taylour’s, and there he went out with us to the Fountain tavern and did give us store of wine, and it being the Duke of York’s birthday, we drank the more to his health.
14 October 1661

… then to the Chancellor’s, and there met with Mr. Dugdale, and with him … and others, to the Fountain tavern, and there staid till twelve at night drinking and singing …. Then Mr. Gawdon being almost drunk had the wit to be gone, and so I took leave too, and it being a fine moonshine night he and I footed it all the way home, but though he was drunk he went such a pace as I did admire how he was able to go.
28 November 1661 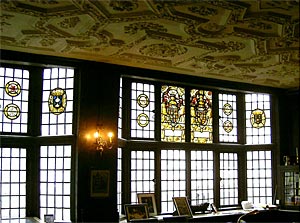 The first floor room includes an original ornate plaster ceiling and oak panelling (west wall). The building is one of very few houses that existed before the Great Fire and survive today. The permanent Pepys exhibition here is free, open 10am to 2pm weekdays. The attendant said that Pepys is believed to have spent time in this room when it was part of the tavern.

From the Pepys exhibition in Prince Henry’s Room: 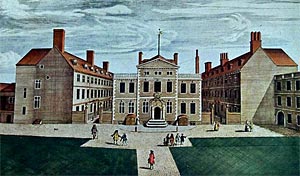 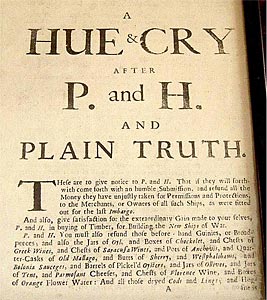 The Cock Tavern at 22 Fleet Street

The Cock was a favourite of Pepys. Although the current building is not the one that he knew (see plaque, below), the gilded cockerel outside and a fireplace (on the first floor) are original (both believed carved by Master Carver Grinling Gibbons6). It is easy to believe that Pepys warmed himself in front of this very fireplace, and probably admired the immodest carvings above it (albeit later than the time of the Diary6). 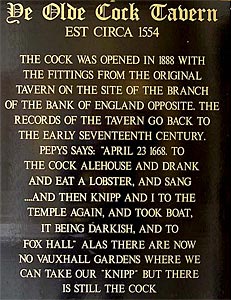 … where meeting my uncle Wight by the way, took him with me thither, and after drinking a health or two round at the Cock, we parted, he and I homewards, parted at Fleet Street, where I found my father newly come home from Brampton very well.”

Peter, thank you for this wonderful "note"! It has the feel and the documentation to render it authoritative to me and to many other readers, I am sure.
Special are your photos, intermingled with references in the Diary; among the former, esp. the photo of the Baptismal Font.
The 1714 engraving of the Navy Office, Crutched Friars, looks like I supposed it.
Again, thank you for this!

Peter, thanks so much for this article and the entire Trilogy! Your excellent writing and photography has been thoroughly enjoyable.

I add my thanks.

I have spent over 6 years reading and researching information regarding S.P.I had no idea about 17 Fleet st., - off I go to have a look.
I have a collection of over 300 books on Pepys and have become totally facinated by this man.
Thank you very much for giving me informaiton that I had not already got.

I would like to find house plans of Seething lane if anyone knows of them?
Thank you.

This article fills in some interesting gaps, for which many thanks.

Re "house plans" of Seething Lane, the earlier building there in which Pepys
worked and lived from c.1660 to 1679 was destroyed by a fire in that year
(it was in the garden of this house in which SP records that he and William
Penn buried documents, wine, a Parmesan cheese and a cloak). Amongst those may have been
his engrossed charter as Secteray to the Navy Board which is now in the Board Room
of the Old Admiralty Office (not open to the public).

The Taylor print of 1714 shows the Navy Office built by Christopher
Wren in 1682, on the same site but facing Crutched Friars. Pepys would
have known it but not lived there as he had by then moved to York House
in Westminster as Secretary to the Board of the Admiralty.

The Taylor print is somewhat fanciful as the facade of the main range was
set back within the two wings. A very similar building still extant
is the Old Admiralty Office on Whitehall, built by Thomas Ripley in 1722 on
the site of the first Admiralty Office, which I strongly feel was designed
by Wren but built by one John Evans in 1695, to house the Admiralty
Board and clerical offices as SP refused to move from York House when he
retired from the Admiralty in 1689. Unfortuantely public access to this building
is very restricted as it is the office of the Deputy Prime Minister, but Ripley's facade
and the courtyard of Commissioners' apartments, very like the Navy Office,
can be glimpsed through Robert Adams' wonderful Admiralty Screen.

There may be plans for the 1682 Navy Board building in the Wren
collection. There seems to be nothing extant for the original Seething Lane
office of 1660 in which SP lived.

My forthcoming book on the Admiralty will cover all this in more detail.

Many thanks for your reply re; Seething Lane. This has been very helpful.
Please let me know when you book is published and I will add it to my collection.

A MUSICAL PEPYS SHOW in aid of Children 1st Scotland.
4th March 06 Royal Deeside Aboyne.
Scotland. 20 miles inland from Aberdeen.
Presented by Les MARSHALL as SAMUEL PEPYS - Musical performance followed by supper.
Choice Ovservations on the subject of music from the Diaries of S.P with music from his life and times performed by the voices and authentic instruments of the highland early music consort.

Greetings to all, from Australia.

While I have been following your comments avidly, and having a proclivity to read between the lines,I feel duty bound to declare an interest. My primary reason for visiting this site is to ascertain if your Justin Reay is my Justin Reay. (Doesn't mean you're a Bad Person!) Pass on my email address to him, & he'll either contact me or otherwise.
I have never been attracted to the halls of academe, and I realise that students of Naval history should have as much factual data available as can be provided. My own small contribution, [as an ex Royal Marine, and Merchant Navy man (Ret'd) who has a huge respect for Samuel Pepys and the wooden ships and iron men of his, and previous times] is, please, please, ensure that your research is thorough - don't allow hypothesis to cloud your judgement of events and personages which we can only now view with 20/20 hindsight.

I Thank you for your Indulgence, and please, somebody, advise me when & where in Australia I may purchase a copy of Dr Davies' "Mr Pepys' Navy"

There are references elsewhere on this site to the Fountain Tavern in the Strand (where there never was a fountain). But that was a newer one than the one by the Temple (where there was a fountain) and it may not yet have existed in the time of the Diary.