Skip to main content
The Banqueting House of Whitehall Palace

…and in the Banqueting-house saw the King create my Lord Chancellor and several others, Earls, and Mr. Crew and several others, Barons: the first being led up by Heralds and five old Earls to the King, and there the patent is read, and the King puts on his vest, and sword, and coronet, and gives him the patent. And then he kisseth the King’s hand, and rises and stands covered before the king. And the same for the Barons, only he is led up but by three of the old Barons, and are girt with swords before they go to the King.
20th April 16611

The scene described here took place in the very room shown in the picture below, now restored to its original decoration and with the throne where worthy subjects presented themselves to the King for ennoblement. The hall was where foreign ambassadors paid their respects to the monarch as well as being the venue for various royal parties and celebrations. 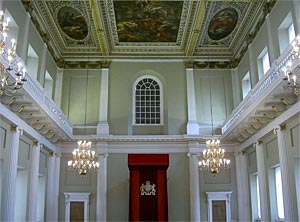 The Banqueting House is the last surviving building of the great palace of Whitehall, but was the newest part of the palace at the time of Samuel Pepys’s diaries. Although not a victim of the Great Fire of 1666, the palace succumbed to another fire in 1698, leaving just the Banqueting House remaining. The building was designed by Inigo Jones to the commission of James I and completed in 1622. Built in the Italian Palladian style, it was the first major classical building in England — an architectural marvel alongside the rambling Tudor palace.2

It was the setting for the execution of Charles I in 1649, from where the king stepped from a window onto a scaffold to be beheaded in front of thousands — witnessed by Pepys as a schoolboy:

Thus it was my chance to see the King beheaded at Whitehall.
13th October 1660

In contrast, it was also where Charles II was welcomed back to London and offered the throne in 1660.

Whitehall Palace with the Banqueting House in 16693

The Banqueting House would have been a very dominant building in Pepys’s day due to its imposing scale and revolutionary architecture. Comparison of the two pictures above and below shows it has changed little in over 300 years. The main change was the cladding in Portland Stone of the west front during the 19th century. 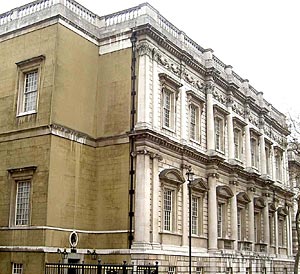 A bust of Charles I (the same model as that at St Margaret’s Church) marks the approximate location of the window from which he stepped onto the scaffold for his execution. The window was in an original annexe (shown in the 1669 engraving), subsequently demolished. A new annexe was added in 1798 (as in photo above), without the window. 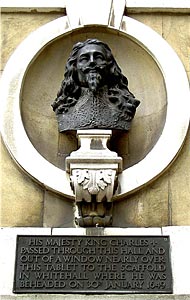 Bust of Charles I

A painting of Charles I is displayed internally at the location of the window at the top of the entrance stairway: 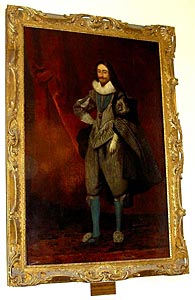 Painting of Charles I

He famously wore an extra shirt for the January event, to be sure his subjects would not think he shivered from fear. 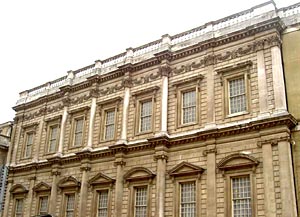 East face of the Banqueting Hall

The rear (east) face of the building is closer to the original Inigo Jones facade, without the Portland Stone cladding. Inside, the Hall is 110 ft long and 55 ft wide (33.5 x 17m). 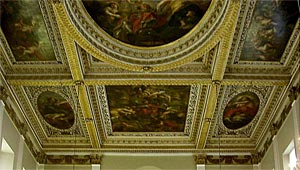 East face of the Banqueting Hall

The most dramatic feature of the interior is the nine ceiling paintings by Peter Paul Rubens, for which he received £3000 and a knighthood. Commissioned by Charles I. They include depictions of the greatness of James I and his divine role as monarch — which perhaps makes it surprising that they survived the rule of Cromwell who himself resided at Whitehall Palace.4

And thence he carried me to Mr. Streeter’s, the famous history-painter over the way, whom I have often heard of, but did never see him before; and there I found him, and Dr. Wren, and several Virtuosos, looking upon the paintings which he is making for the new Theatre at Oxford: and, indeed, they look as if they would be very fine, and the rest think better than those of Rubens in the Banqueting-house at White Hall, but I do not so fully think so.
1st Feb 1669

History suggests that Pepys’s view was a wise one.

23rd August 1662: “I offered eight shillings for a boat to attend me this afternoon, and they would not, it being the day of the Queen’s coming to town from Hampton Court. So we fairly walked it to White Hall … and up to the top of the new Banqueting House there, over the Thames, which was a most pleasant place as any I could have got; and all the show consisted chiefly in the number of boats and barges; and two pageants, one of a King, and another of a Queen, with her Maydes of Honour sitting at her feet very prettily… Anon come the King and Queen in a barge under a canopy with 10,000 barges and boats… And so they landed at White Hall Bridge, and the great guns on the other side went off: But that which pleased me best was, that my Lady Castlemaine stood over against us upon a piece of White Hall, where I glutted myself with looking on her.

27th May 1663: “Then into the Great Garden up to the Banqueting House; and there by his glass we drew in the species very pretty.”

13th June 1663: “Yesterday, upon conference with the King in the Banqueting House, the Parliament did agree with much ado, it being carried but by forty-two voices, that they would supply him with a sum of money; but what and how is not yet known, but expected to be done with great disputes the next week.”

13th April 1661: “I went to the Banquet house, and there saw the King heal [for the King’s evil], the first time that ever I saw him do it; which he did with great gravity, and it seemed to me to be an ugly office and a simple one.”

29th December 1662: “Thence to White Hall, and got up to the top gallerys in the Banquetting House, to see the audience of the Russia Embassadors; which [took place] after long waiting and fear of the falling of the gallery (it being so full, and part of it being parted from the rest, for nobody to come up merely from the weakness thereof): and very handsome it was. After they were come in, I went down and got through the croude almost as high as the King and the Embassadors, where I saw all the presents, being rich furs, hawks, carpets, cloths of tissue, and sea-horse teeth. The King took two or three hawks upon his fist, having a glove on, wrought with gold, given him for the purpose. The son of one of the Embassadors was in the richest suit for pearl and tissue, that ever I did see, or shall, I believe. After they and all the company had kissed the King’s hand, then the three Embassadors and the son, and no more, did kiss the Queen’s. One thing more I did observe, that the chief Embassador did carry up his master’s letters in state before him on high; and as soon as he had delivered them, he did fall down to the ground and lay there a great while. After all was done, the company broke up; and I spent a little while walking up and down the gallery seeing the ladies, the two Queens, and the Duke of Monmouth with his little mistress, which is very little, and like my brother-in-law’s wife.”

Banqueting House is open to the public, Mon to Sat 10am to 5pm, except Bank Holidays and from 24 December to 1 January. May also close for special functions. Fees: Adults £4, Concessions £3; Children £2.60. Not very exciting unless you have a special interest in the building or the Rubens paintings. Includes an audio guide — dominated by detailed (and tedious) commentary on the paintings, but also an interesting description of how foreign ambassadors were ceremonially received by the king, and of the route taken by Charles I on his way to the scaffold. A film giving a potted history of Whitehall and the Stuarts is also of interest. See the official website.

Note: While believed to be accurate, this note should not be assumed to be authoritative, with information taken from a number of sources, some more reliable than others. Photos by P. Easton April 2004.

Peter....Another job well done--beautiful pictures and descriptions. The ceiling is magnificent. Thanks once again!

Very nice! The Hall was closed for a special function when I was in London in June, and this helps me deal with the pain a bit... :-)

The old "Banquiting House" Peter Ackroyd in "Sakespeare" notes that Othello played in the old hall for James I. Built by Elizabeth I 23 yrs before, the King thought it "old, rotten and slight-built shed", and so ...

Hello, We are a book packaging company based in Delhi, India. We are mainly into children educational/reference books. We do these book for the publishers based in UK and US. Currently we are working on a book titled Henry VIII, for which we require image of "Place of whitehall ceiling" and recently we have came across a very stunning image of the same from your site. We would like to use the image in a children educational book. Plz if u provide me the high resolution for the same kindly get back to us as soon as possible. waiting for your reply. Regards, Jyoti Sachdev jyotis@q2aindia

The paintings on the ceiling of the Banqueting Hall were commissioned by Charles I, so they were created a bit more than a century after Henry VIII moved in.