Skip to main content
Samuel Pepys and His Books 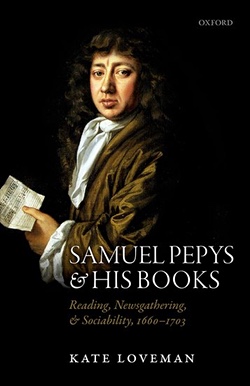 Mens cuiusque is est quisque: the mind is the man. Pepys adopted this quote from Cicero as his motto in later life. He had bookplates made featuring the Latin inscription beneath a portrait of himself in flourishing middle age. Always conscious of his public persona (some would say always a social climber) the clear implication was that a person’s books demonstrate the breadth of their learning and intellectual interests, and perhaps their political and religious views. So when we stand in the Pepys Library at Magdalene College, Cambridge looking at the handsome book presses, the portraits and the maps, scanning the shelves and examining the titles, are we gazing into the mind of Samuel Pepys?

In his own words, his policy when assembling the library was “the comprehending in fewest books and least room the greatest diversity of subjects, styles and languages its owner’s reading will bear; with regard to their authors, editions and proportions on each subject answerable to their weight and the particular genius of their said owner.” (Pepys’ memorandum, “On the Conditions of a Private Library”.)

There is of course a difference between the edited and polished collection that now makes up the Pepys Library and the catalogue of reading material Pepys enjoyed throughout his lifetime. Dr Loveman looks at the broader picture, examining one man’s lifetime of reading in the wider historical context of Restoration London and alongside the known reading habits of his contemporaries. Making use of available evidence from the diary, Pepys’ own unpublished papers and elsewhere (an impressive bibliography!) the book describes “reading, newsgathering and sociability” in the period 1660-1703.

We begin with an examination of reading behaviour in the Pepys household and how that might compare with that of Restoration London as a whole. Reading gave one access to the Bible, religious instruction, information and entertainment: Pepys expected a reasonable level of literacy from his servants. His eyesight problems in the later diary years led him to employ Tom Edwards in the capacity of reader for official documents, while Elizabeth entertained him by reading from plays, poetry or histories.

His classical education having generally omitted the more practical skills, many of Pepys’ early acquisitions were for the purposes of self-education in practical tasks such as measurement and arithmetic. He had a nice slide-rule made for himself and having mastered it, kept the instruction manual in his library. He also acquired books on moral self-improvement including the maxims of Epictetus from which his favourite quotation was, “Of things, some are in our power and others are not”. He read and re-read Osborne’s book Advice to a Son as well as Francis Bacon’s Faber Fortunae and Arcana Aulica, or Walsingham’s Manual.

Professionally and socially, it was essential for the ambitious Pepys to have access to the most up to date news, gossip and rumour. How was news spread in Restoration London and what use did Pepys make of written sources? News books are discussed and compared with other sources of news and gossip which Pepys had access to, from the inns and coffee houses to the homes of the elite and even the galleries of Whitehall.

How did writers structure and title their books in an age before our modern disciplinary boundaries, how were those books categorised and promoted by the booksellers? When “history” was a convenient catch-all term for anything in narrative form, how could readers distinguish between “fiction” and “non-fiction”? With this book we can effectively time-travel to a Restoration bookseller’s to see the shop’s layout, assistants’ selling techniques, the buyer’s experience and the behaviour and appearance of fellow customers.

In later life, Pepys’ allegiance to James II led him to be suspected of contributing to the “Popish Plot” and to imprisonment in the Tower of London. At this point his choice of reading matter acquired a more sinister significance: evidence in a legal battle that could potentially have led to his execution for treason. Using content from unpublished papers, Kate Loveman unpacks the issues around what might have been seen as subversive texts and how Pepys cleverly drew distinctions between what he read for “private devotion” and the less acceptable books kept for information about the development of religion. His own “Notes from Discourses touching Religion” were never published because in the political climate they were simply unpublishable.

In 1666 Pepys built a second-storey extension on his house in Seething Lane and in re-ordering his upstairs rooms, created private closets for himself and Elizabeth. The book examines how closets were used at the time and their wider social significance as a means of displaying status, personal taste and intellectual prestige. There was a particular form of etiquette around visits; following a tour of Abigail William’s closet, Pepys chose to snub her by refusing to offer an appropriate gift. Gifts or loans of books, ornaments and objets could of course cement a friendship, as now.

The final chapter includes illustrations of the library Pepys created at York Place, drawn in 1693 by Sutton Nicholls, including the 12 distinctive book presses he devised with Sympson the Navy joiner in 1666. There is also a photograph of the Pepys Library as it stands today. Pepys’ last years were spent in retirement at Clapham, preparing his nephew John Jackson to take over the library, to perfect it according to his instructions and to see it safely handed over to Magdalene College Cambridge. Pepys died in 1701 and the Pepys Library was finally established in 1724.

Dr Loveman is Associate Professor in English at the University of Leicester. She made headlines in 2011 when her research uncovered a surprise “last chapter” in the saga of Pepys’ affair with Deb Willet.

Her latest book is a fascinating work of sparkling erudition which any serious Pepys reader would enjoy.

Samuel Pepys and his Books
by Kate Loveman
Published by Oxford University Press, 2015

Not mentioned in the review above are the "Pepys collection of over 1,800 ballads [which] resides in The Pepys Library at Magdalene College, Cambridge and can be accessed online here: https://ebba.english.ucsb.edu/page/pepys

A review in Economist.com
Pepys and Evelyn, chroniclers of the English Renaissance
https://www.economist.com/news/books-and-arts/217…