[This is the first of three articles originally posted to the discussion group website.]

St Margaret’s Church was one of the ever-present landmarks of Pepys’s life in London, and was where he married Elizabeth in 1655. Other famous peopled married there include John Milton in 1656 and Winston Churchill in 1908. Edward Montagu (later 1st Earl of Sandwich) was also married there in 16421. Ironically, Pepys’s marriage was a civil rather than a religious affair, with religious ceremonies having been declared invalid in 16531 (a policy presumably reversed at the Restoration).

The church is located immediately to the north of the more celebrated Westminster Abbey, literally in its shadow, and across the road from Westminster Hall and the modern-day Palace of Westminster (Houses of Parliament). It has been the parish church of the House of Commons since 16142. Founded in 11th or 12th century, it was rebuilt in 1504-23. While the current building represents the basic structure that Pepys would have known, there have been changes. It was refaced with Portland stone in 1735, and the west porch was added in 1876-95. The tower was largely rebuilt in the 1730s3. The church was extensively damaged by bombing in 1941 but was quickly restored4. There have also been changes to the interior with stain-glassed windows and memorials added over the years and newer furnishings. 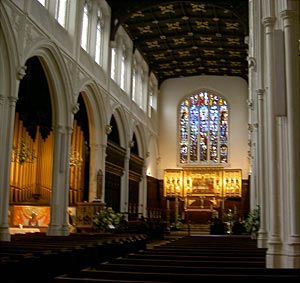 Pepys attended Sunday service at St Margaret’s from time-to-time over the years, most notably when it became an opportunity for extra-marital trysts, as reported in a number of diary entries (see below). 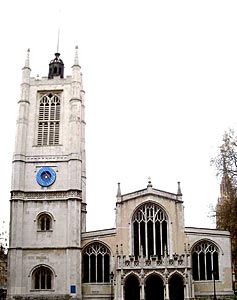 A couple of features demonstrate how both Charles I and his executioners were considered worthy, but for whom the country has some regret at their treatment. On the outside west wall, there is a plaque in remembrance of the dis-internment of those associated with Cromwell and of Charles I’s trial and execution, and the burning of their bodies in the churchyard. On the east wall, however, there is a bust of Charles I looking out defiantly towards the statue of Cromwell sited across the road at Westminster Hall. 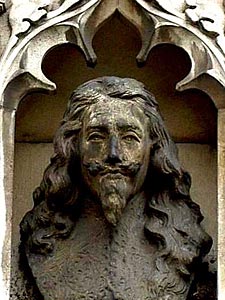 “This tablet is erected by the Cromwell Association to the memory of the undersigned whose remains were disinterred from Westminster Abbey at the time of the restoration of King Charles II and were in September 1661 buried in this churchyard of St Margaret’s.”

There are several references, with St Margaret’s often referred to simply as “the parish church” of Westminster. (These entries are from the Project Gutenberg Etext5.)

Hearing ‘Common Prayer’ after the restoration
5th August 1660: “After dinner to St. Margaret’s, where the first time I ever heard Common Prayer in that Church.”

Good and bad sermons
2nd September 1660: “So, to St. Margarett’s, and heard a good sermon upon the text “Teach us the old way…”

26th May 1661: “In the afternoon both the Sir Williams came to church, where we had a dull stranger.”

3rd June 1666: “I to St. Margaret’s, Westminster, and there saw at church my pretty Betty Michell, and thence to the Abbey, and so to Mrs. Martin, and there did what ‘je voudrais avec her…”

5th August 1666: “Thence walked to the Parish Church to have one look upon Betty Michell”

26th May 1667: “After dinner I by water alone to Westminster, where, not finding Mrs. Martin within, did go towards the parish church, and in the way did overtake her… [Having agreed to meet her forthwith] did go out again myself, but met with Mr. Howlett, who, offering me a pew in the gallery, I had no excuse but up with him I must go, and then much against my will staid out the whole church in pain while she expected me at home, but I did entertain myself with my perspective glass up and down the church, by which I had the great pleasure of seeing and gazing at a great many very fine women; and what with that, and sleeping, I passed away the time till sermon was done, and then to Mrs. Martin, and there staid with her an hour or two, and there did what I would with her.”

25th August 1667: “…and to the parish church, thinking to see Betty Michell; and did stay an hour in the crowd, thinking, by the end of a nose that I saw, that it had been her; but at last the head turned towards me, and it was her mother, which vexed me, and so I back to my boat…”

Note: While this note is believed to be accurate, it should not be assumed to be authoritative, with information taken from a number of sources, some more reliable than others. Photos by P. Easton.

Peter, Thanks so much for the beautiful article and fantastic pictures of the church! Quite magnificent! Of interesting note about Pepys and his "relation" with the church, Percival Hunt in "Samuel Pepys In the Diary" states that, "Though the diary shows the influence of the Bible and the Book of Common Prayer, Pepys, like many of his time and his class, never thought of the Church as a spiritual guide. The Established Church was important in the social and political structure of England, and his parish church [St. Olave's] was a needed part of his own way of living....The Diary has no conscious concern even for a sentence with the life of the spirit which is in men. In spiritual speculations and spiritual struggle Pepys shows no interest..." (page 153)...perhaps this is why he had no issue with making this a location of not so religiously minded activity.

Informative, succinct, and well-illustrated---thank you, Peter Easton, for putting in so much time on this article, and looking forward to the other two.

Thank you for this! An additional note - it is commonly thought that the St Margaret to whom this church is dedicated is St Margaret of Scotland, but it is actually the far older St Margaret of Antioch, an early Christian martyr and a very popular medieval Saint. See http://www.catholic-forum.com/saints/saintm19.htm Other churches dedicated to her in England include Binsey, Tanfield, Charlwood, Chippenham and Leytonestone in London.

Peter, kudos! St. Margaret's depicted as an aphrodysiac! Who but you and SP and the Betty's (bearing by-names of Elizabeth!) could not only have had this thought, but have presented it, ah, graphically [text juxtaposed with the upthrusts of the arches and spires, Charles I looking up his nose?!)

William Hazlitt the essayist and his family lived nearby from 1812 to 1819. Their son was baptized here in 1814.

I just read that the poet John Keats's brother, George, was married at St. Margaret's May 28, 1818 with Keats as witness. It was a rough time for Keats, as his brother Tom was dying of consumption and his brother George and his new wife Georgiana were about to leave England to start a new life in Illinois. Your site is incredible. Thanks. Rich