When I rebuilt this site at the beginning of 2013, ready for the second cycle of the diary, I didn’t have time to finish the design of the pages. While all the behind-the-scenes code had been built from scratch, the visible parts didn’t get much attention. The monochrome look was functional but didn’t give the impression a website about a 17th century character should.

I didn’t expect it to take me so long to finish this, but finally the site now looks a little better. I’ve tried to balance a few things:

Hopefully I’ve succeeded with all but the final point! I dread to think how long it would have taken me if I’d undertaken a more fundamental redesign. All of the best aspects of the design are entirely down to ace designer and lovely chap Dean Vipond, while anything that’s not working or looking strange is down to my implementation of his work.

There are still things to finish. I’m going to work back through the Site News posts and In-Depth Articles to fix a lot of things which are now broken. And there are a few other rough edges that will get smoothed out over time. Please do post below if there’s something that looks wrong, or that doesn’t work, or simply makes your regular use of the site more difficult than it should be!

UPDATE. Here are some images of the different appearances of the site over the years: 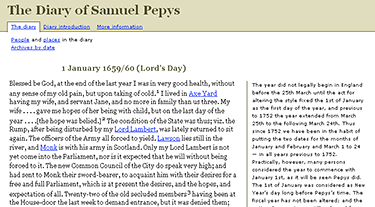 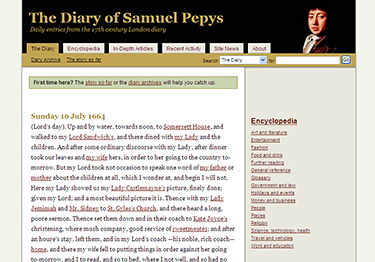 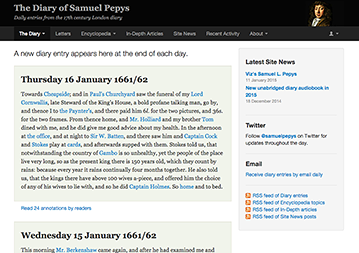 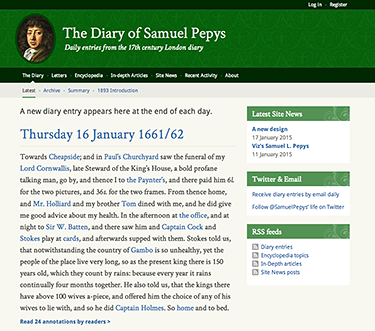 I like the green. What was the reason for that? (As a side issue, I followed the original but was waylaid for a few years. This time, I intend on reading all of it.)

Great work, Phil - clear and eye-catching. Yet another improvement to our favourite site.

Very smart. That is an attractive green. As ever, thanks ever so much for your continued work on this site, it is a constant joy.

What pleasure you provide - and now an even better look! Thank you for all of the time and effort you have put into this very enjoyable site. Your hard work is much appreciated.

Bravo! I had really missed Pepys Diary it was thee one thing I could count on to bring me a daily smile or chuckle or 2. I discovered it was being delivered via another email that due to my switching to Chrome from Firefox wasn't showing up. Alas I rectified it + I'm happy to be back + congrats on yer new look Phil! Is there any chance of linking to Facebook to bring Pepys to the masses? Cheers! ;)

Thank you for improvements that enhance the pleasure of visiting this site. The arrival of the day's entry is much anticipated and greatly appreciated.

Sorry for the slow reply; it's been a busy week. Many thanks for the kind comments. It's difficult to change anything on a site that people visit frequently and are fond of because, understandably, it's very easy to disrupt habits.

john: I'd have to ask Dean, the designer, why he chose the green. I think we tried a couple of other colours too, although that was nearly 18 months ago. Green seems to work -- there's something of the leather-bound book or luxurious wallpaper about it I think!

William: I don't use Facebook much myself. Any suggestions for what format Pepys would be most suited to on Facebook? (No promises though; there's always so much to get done!)

The only thing I'd add is that the grey text on a grey background is very hard work to read. I'm fairly young and don't have dodgy eyes, so can only imagine what it's like for others.

Bear in mind this is a site where the whole point is to be able to read the text!

Simon - is there any particular text that's hard to read, or is it all of it? Even the lighter text looks pretty dark to me, but these things can vary quite a bit depending on display and computer settings, never mind individuals' eyesight. Let me know, as I'd like to make sure it's easy to read for everyone!

Samuel Pepys already has a Facebook page which doesn’t link here:
https://www.facebook.com/pages/Samuel-Pepys/10369…
‘This Page is automatically generated based on what Facebook users are interested in and not affiliated with or endorsed by anyone associated with the topic.’

No doubt FB would add a link to this site if asked nicely.

I suggest that a fan of this site of the Facebook generation should create a proper SP page and post news of their doings linked to this site. There is no reason to leave it to ‘Joe Soap’ aka Phil Gyford. There is no need to post daily. Posts about SP’s private life - his philandering and his marriage bed - would be well received by Facebookers who would be bored stiff by news of his working life. Think tabloid and you won’t go far wrong!

I am 70 and find the site easy to read. I have an FB page but I don’t use it or like FB so I am not volunteering for this.