I promised several of you that I’d give a final update on statistics, now that the diary’s ended. It’s been two-and-a-half years since I last gave a detailed update, so let’s so what’s changed…

Here’s a tiny graph showing the number of annotations posted over the past four months, which makes the end of the Diary quite obvious:

The Encyclopedia now has 4,790 topics and has 9,425 annotations, an average of about two per topic. Here’s a graph of those over the past four months:

Of those 4,790 topics, 2,694 are people and some of them have the small portrait images that appear over their links in Diary entries. Here’s an image which shows all the people who do (and don’t) have their own portrait (click to see it bigger): 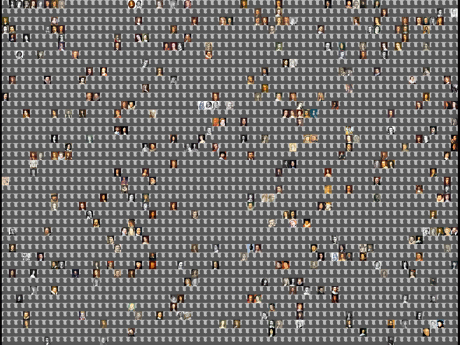 More than half of the 4,790 Encyclopedia topics, 2,549, contain content from Wikipedia.

In-Depth Articles has 256 comments and Site News has 1,297. Added to the 4 annotations in Letters that makes a total of 69,585 across the whole site.

There are now something like 56,642 hyperlinks between words in Diary entries and topics in the Encyclopedia.

Looking at the data since 16 November 2005 (the earliest I have Google Analytics data for), it’s surprising how consistent every one of these measures has been. There has perhaps been a very gradual reduction over time, but it’s hardly noticeable.

Here are two graphs, showing the changes over time (click for larger versions):

Unique Visitors, by week (see also by day or by month):

Pageviews, by week (see also by day or by month): 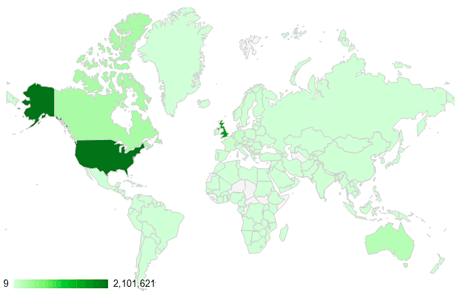 This table shows the top 25 countries in terms of number of Visits, again since 16 November 2005: 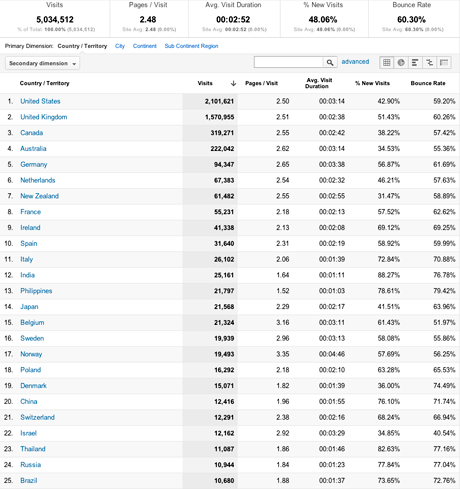 I think this table shows that around 48% of visits were one-offs, with that person not returning. But we can also see that nearly 40% of people visited 9 or more times. (I’m a bit hazy about this table, so I may be misinterpreting it.) 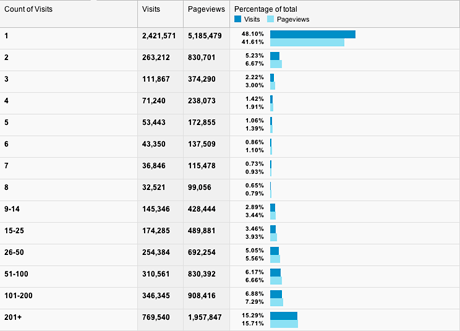 This chart shows where people came to the site from, since 16 November 2005. I think Direct Traffic is people visiting from a bookmark or typing in the URL, while Referral Traffic is people following a link from somewhere other than a search engine (which is Search Traffic): 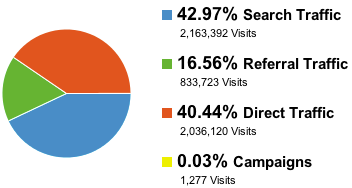 Here are the top 25 things people searched for on search engines to get here (numbers in brackets are the number of visits for that search term during since 16 November 2005):

Here’s a chart of which web browsers have been most popular for visiting the site over the first half of 2012:

And, because web browsers have changed over the years, I collated the same chart for every year from 2005 and made this graph. I ended up omitting most of the browsers that were clustered at or below the 1% share mark, leaving the four most popular: 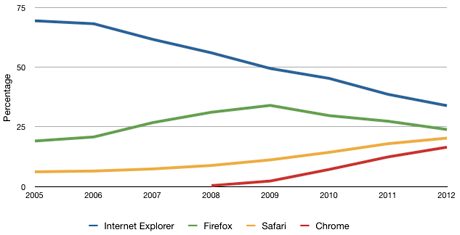 Next, a summary of how many people read the site via RSS or email (possibly in addition to on the web). The main Diary feed has 1,990 subscribers, the Story So Far feed has 85 subscribers, the Encyclopedia 78 subscribers, Site News 110 and In-Depth Articles 54. By the end of the Diary 391 people were receiving the entries by email.

These are mostly quite a bit lower than in 2010 and this graph, showing the number of subscribers to the Diary feed since October 2007 does look a bit strange:

I’ve no idea why things changed so much from 2011, including one big sudden drop in March 2011.

The number of people following @samuelpepys continued to grow steadily, right up to the end of the Diary, and he currently has 31,398 followers. I suspect that there isn’t much overlap between the people who followed the fragments of Sam’s diary on Twitter, and those of you who read the full diary entries via this site.

And that’s it! If there are any other figures you’re interested in which I haven’t covered, let me know and I’ll see what I can dig out.

Phil, Thank you for this, and again for all that you have done, and particularly for making the idea -- whenever and however it struck you -- the reality that all of us have shared.

Whot say, everybody? Look at those stats.; there are enough of us here. Phil has been grinding away at this for ten years. Let's put Phil up for an M.B.E.

"...
made a difference to their community or field of work?
brought distinction to British life and enhanced its reputation?
exemplified the best sustained and selfless voluntary service?
demonstrated innovation and entrepreneurship?
carried the respect of their peers?
..."

Can an US citizen influence the M.B.E. list? If so, I'll join the campaign. As you can see from the date of my post, I am still clicking on my Pepys bookmark over a month after he stopped writing. I hope the annotations will never stop.

Phil, as one who requested the data, thank you for organizing and posting these.

Fascinating data. Someone will slice and dice it into a master's thesis someday.

Thank you, Phil. How lovely to enter the site again for old time's sake and, yet again, find something new to ponder.

And, honestly, I cannot imagine anyone visiting only once!

If the one-time visitors are measured by non-recurring IP address then I am responsible for some number of them myself, as I travel for work and pleasure, and with the diary as my home page for nine years have visited from many different IP addresses.

I expect that there are many others with similar visiting habits, so john's caveat is appropriate. The grad student that Nix mentioned would have to control for those behaviors.

Yes, of course, this is all just raw data pulled from Google Analytics. I expect the effects of bots of various kinds skew the results even more than the few people who disable cookies or view the site while frequently travelling!

I wish we had a "like" button, because so often I see things on the site which I want to endorse without writing a duplicating screed. That Phil deserves official commendation for such a labor of love is still true. THANK YOU.