There’s been a parody Samuel Pepys twitter account running for a while at @Pepys_Diaries. It’s a modern-day take on Pepys, imagining him writing in the modern world. Unfortunately one of the account’s recent tweets, drawing parallels between the Plague and 2020’s coronavirus, has been quoted out of context and spread around as if it’s a real excerpt from the diary. The tweet:

On hearing ill rumour that Londoners may soon be urged into their lodgings by Her Majesty’s men, I looked upon the street to see a gaggle of striplings making fair merry, and no doubt spreading the plague well about. Not a care had these rogues for the health of their elders!

(Update: There’s at least one more quote that’s being passed around as if it’s genuine, but is also from the fake diary account:

The taverns are fair full of gadabouts making merry this eve. And though I may press my face against the window like an urchin at a confectioner’s, I am tempted not by the sweetmeats within. A dram in exchange for the pox is an ill bargain indeed.

Screenshots of this, attributed to Samuel Pepys in 1664, get passed around Twitter and Facebook as if it’s a prescient example of Pepys’s diarising. There are obvious things that point to why it’s not a real quote (as outlined in this Londonist article), and misuses of language that are apparent to those of us who read the real diary, but that doesn’t stop those who aren’t too familiar with the period.

Traffic to our site has shot up over the past couple of days, with most of the new visits coming from search engines and ending up on the Encyclopedia page about the Plague. Is this people fact-checking that tweet? Or some other coronavirus-related inspiration? Here’s a chart showing the rise in visits, and where they come from: 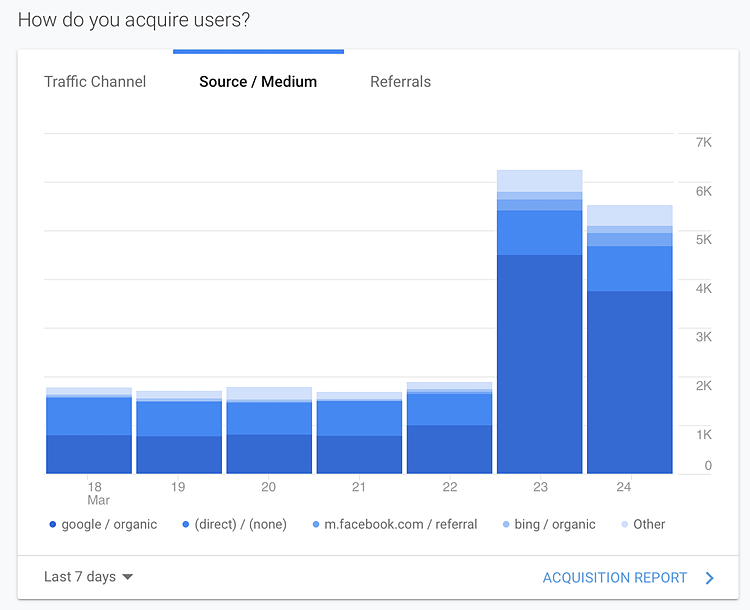 It shows that we usually have around 1800 users per day, which goes up to over 6000 on 23 March. Most of those coming via “google / organic”, which means from Google search results. “(direct) / (none)” means people typing in the site’s URL or following their own bookmarks (I think).

Meanwhile, for an alternative Pepys parody, magazine The Fence is running a possibly regular series of modern-day-Pepys diaries which are clearly written by someone very familiar with the language of the real thing, unlike the @Pepys_Diaries account. Here’s the current article (and an archived version in case that disappears), and an excerpt:

Up betimes and by tube to Westminster, and there busy with several business all morning, for our firm intends a splendid show at the conference in the middle of this month. Then comes the intern to my office like a doting fool, and proves himself an ass talking excitedly of this plague come late out of China, which, he says, is now in Italy. Of which, my wife and I having had no Wi-Fi this last month, I know nothing, only to see how vexed this blockhead intern was did almost make me fearful myself. Yet I remembered talking with my Lord and Lady touching this matter, and him very skeptical, and my lady said to me, ‘What, Mr Pepys – shall’t die of a hiccough at the last?’ And at this jest we were all very merry. Thence home to sing with my wife in the garden, but with much trouble, for it was bitterly cold. And so to bed, our iPhones left downstairs as is now our custom.

Update 2: There’s been another flurry of those tweets being sent around social media, resulting in an even larger spike in traffic for this site as people googled for the source. This time most of the extra traffic was coming direct to this page, so my strategy of writing about it here has obviously worked. As you can see from the chart below we went from around 1,000 users per day up to a peak of 13,449 on 4th July, before returning to normal.

I also noticed that Snopes now has a page about those tweets which quotes heavily from this page. (11th July 2020)

How about registered users? Have they shot up since the virus, I being one myself.

I meant has there been a notable increase in registered users since the Virus started?

Three excellent articles have been published here (this is linked to the first -- I was able to access the other two by scrolling down through other articles -- pretty easy). For a thoughtful comparison of our times, this is hard to beat.

People have a renewed interest in the plague and Pepys because of our experiences with Covid-19. Today the New York Times devoted its front page to printing the names of 1,000 victims ... and the USofA approaches the 100,000 deaths mark. The Guardian also posted a thoughtful article about three people who documented it more or less at the time, including Pepys of course (see link below).

All of which made me contemplate my here-and-now. I now understand why Pepys did not document more of the horrors. Like him, I looks for diversions from the reality -- I'm eating too much comfort food, while Pepys found his diversions in wine, women and song. But then, he didn't have lockdown.

We have our share of the Rev. Thomas Vincents promising people that if they pray and go to Church, God will protect them -- but He isn't, any more than He could in 1665. Our advantage is that (thanks to the Royal Society and its many spinoffs) we now have the knowledge on how to 'starve' the virus. Whether or not we do/can is up to us. Freedom of Choice is a difficult thing, given the long-term effects Pepys writes about in 1666 and 1667 which may well be things we also have to confront, because a lockdown and a die-off do similar things to the economy and food chain. Maybe technology can save the (wealthy) majority from that ... we shall see. Stay posted.

It would seem so. This page was the top result in a google search with the term
fact check samuel pepys taverns full

On 6 July the Snopes fact-check website posted a link to this page.

I've posted an update because there's been another flurry of those tweets being sent around resulting in an even larger spike in traffic for the site.

Is the spike in traffic a good or bad thing or does it not matter?

"Is the spike in traffic a good or bad thing or does it not matter?"

Louise, I think it can only be a good thing if they learned something, and hopefully told others about our efforts. Presumably some will be pulled in and start to contribute. Google makes us all historians if we want to be. I lurked for quite a long time before believing I had something to contribute. How about you?