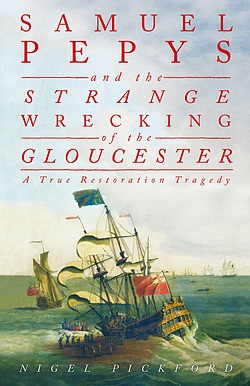 In 1682 a fleet of eight ships set sail from London to Edinburgh carrying James, Duke of York north to reunite with his wife Mary of Modena. Charles II was by now an ageing monarch, in poor health. He wanted to establish his younger brother and sister-in-law as rightful heirs to the throne, and with all due haste. Mary was pregnant and despite their Catholic religion, this little family embodied the future of the Stuart dynasty and the hopes of the nation. They would return to England together, in triumph.

Fate however, had other plans. On the way north James’ ship, the Gloucester, struck a sandbank off the Norfolk coast. James was rescued but many passengers and sailors lost their lives, and the ship sank. Samuel Pepys had also sailed with the fleet and his letters record the muddle of blame and misinformation that followed.

Nigel Pickford examines the evidence and finds some intriguing facts. The pilot responsible for navigating the ship, Captain Ayres, had been described as a “fanatick”, a member of the anti-Catholic faction behind the Popish Plot. In 1679, this group of extremists had landed Pepys in the Tower of London on a series of charges, all of which later proved groundless.

Pepys’ behaviour before joining the fleet will seem out of character to Diary readers. He turned down the invitation to join James on the Gloucester, choosing a different vessel. Moreover, he then failed to mention to his closest friends that he was leaving. Did he suspect something was not quite right? Had his experience of imprisonment made him wary of identifying too closely with James’ inner circle and of associating with known Catholics?

The 26-year-old wooden ship was not in the best condition, with a history of leaking in the bows. It had been repeatedly patched up but was then left to rot for more than eight years in Portsmouth harbour. Was this another reason for Pepys’ caution? And if so, why did he not act? Why did he not speak to James about his reservations? Pickford demonstrates how Pepys’ behaviour demonstrates the extent of his prior knowledge. Ultimately it tells us even more about his character.

The wreck of the Gloucester is still sitting on the seabed along with thousands of unique seventeenth century artefacts. This precious time-capsule is not protected from potential looting by any laws, nor from tides and shifting sands. Pickford ends with a plea for a concerted intervention to find a way forward for this important site, before it is lost forever.

This is not a novel but the narrative grips the reader like the best detective fiction. It is both an expertly crafted work of scholarship and a very good read.

[The publisher provided a copy of this book for review.]

[I make a small amount if you buy from Bookshop.org or Amazon, but it would be even better if you buy direct from your favourite independent bookstore! P.G.]

There's also an article with links on phys (dot) org too.