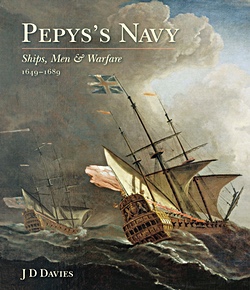 Davies has marshalled a formidable range and depth of information in this book, which he has arranged with almost Pepysian clarity and method. There are thirteen parts, each subdivided into several chapters:

A useful list of “Further Reading” includes the Pepys Diary website. (Hurrah! We so rarely get any recognition!) There are masses of illustrations including full-colour reproductions of some very fine maritime art. It is disappointing that so many paintings are represented in black and white but I suppose that this, as well as the rather small typeface serve to moderate the size of the volume and its price. I did find myself fantasising about a huge, two-volume edition in full colour; it would be glorious but probably prohibitively expensive. As it stands this is an excellent reference book for all lovers of ships and the navy as well as Pepys readers.

I wondered to begin with if the title was perhaps slightly disingenuous in invoking Pepys? In what way could the Navy of 1649 be considered “Pepys’s Navy”? And of course it wasn’t, not yet. This is a book primarily about naval history. References to the Navy of Cromwell’s time and even the early years of Charles’s navy, may serve as historical background to the important role Pepys was to play in later years as “saviour of the navy” and Secretary to the Admiralty.

From 1649 to 1660 Pepys was busy elsewhere, first as a student and then as a humble Westminster clerk in the employment of Sir George Downing. He describes himself at this point as:

…esteemed rich, but indeed very poor; besides my goods of my house, and my office (i.e. his employment) which at present is somewhat uncertain.

At the beginning of the diary period, then, his only connection with the Navy was through his cousin and patron, Edward Montagu, who had been General-at-Sea under Cromwell from 1656.

Things were however about to change radically for Pepys, for the Navy and for Britain, and it began with a sea voyage. Montagu played a crucial role in the Restoration; he and George Monck were made joint Generals-at-Sea in command of the fleet which sailed to Sheveningen to bring Charles II back to England. He took the young Pepys with him as his secretary and the diary describes this historic voyage in detail, commencing when Montagu

asked me whether I could, without too much inconvenience, go to sea as his secretary, and bid me think of it. He also began to talk of things of State, and told me that he should want one in that capacity at sea, that he might trust in, and therefore he would have me to go.

Pepys describes the weeks of waiting as the fleet bobbed around in the Thames estuary and off the Kent coast. All the while, despatches were speeding back and forth between the government ministers at sea and those in London. Riotous dinners were had on board, games of bowls won and lost. Pepys spent some of his time chatting to the officers, finding out what he could about their work.

Finally everything was in place and the fleet set sail for the coast of Holland. Pepys became a tourist for a few days in The Hague, exploring shops and taverns, buying souvenirs.The royal party was accommodated on several different ships, presumably for reasons of security, and sailed back to England in triumph. You can read all about it in the diary of March to July 1660.

While Monck was to become Duke of Albemarle, Montagu was rewarded at the Restoration with the title of Earl of Sandwich and made Knight of the Garter. He then helped Pepys into the post of Clerk of the Acts to the newly-reformed Navy Board. Pepys had to act swiftly and decisively over the next couple of days to secure his position, firstly by simply turning up and doing the job:

From thence to the Navy Office, where in the afternoon we met and sat, and there I begun to sign bills in the Office the first time.

Then he personally chased up the copying and sealing of his royal warrant (he ruefully noted that it cost him 40s.) and finally he secured the accommodation he wanted by turning up at the Navy Board premises on Seething Lane with a pair of sheets:

I borrowed a pair of sheets of Mr Howe, and by coach went to the Navy office, and lay (Mr Hater, my clerk, with me) at Commissioner Willoughby’s house, where I was received by him very civilly and slept well.”

And so it was not by training or intent, but by good fortune and sheer audacity that Pepys’ thirty-year career as a Naval Administrator began.

From the start, Pepys showed himself to be dedicated, energetic and efficient in his work. In the diary we see him teaching himself practical maths, exploring the worlds of navigators, ropemakers, wood merchants, victuallers. He made sure that no-one pulled the wool over his eyes in his dealings for the Crown. No detail was too insignificant and no policy decision escaped his critical notice, in spite of his junior status. He made himself indispensible to James, Duke of York who was Lord High Admiral.

Pepys’ loyalty and hard work were rewarded when in 1673 he was made Secretary to the Admiralty. According to Arthur Bryant, Pepys was to become “The Saviour of the Navy” and ended his career as the British equivalent of the French Secretary of State for Marine Affairs, answerable only to the King. “He had begun his official career forty years before in an age when rank and birth counted infinitely more than they do today, as a subordinate clerk, ignorant of the first rudiments of the profession. He had attained to a unique mastery of its every aspect. When he ended his work the tonnage of the Navy was 101,032 tons as compared with 62,594 when he began it.” (A. Bryant, Samuel Pepys, The Saviour of the Navy Collins 1949). In this sense of course, it had indeed become “Pepys’s Navy”.

Pepys himself dreamed of writing a book about the Navy and during the diary period sought out information about its history:

We did also talk of a History of the Navy of England, how fit it were to be writ; and he did say that it hath been in his mind to propose to me the writing of the History of the late Dutch warr, which I am glad to hear, it being a thing I much desire, and sorts mightily with my genius.

I went to speak with Mr Williamson that if he hath any papers relating to the Navy I might see them, which he promises me: and so by water home, with great content for what I have this day found, having got almost as much as I desire of the history of the Navy, from 1618 to 1642, when the King and Parliament fell out.

But my business was to speak with Ackworth, about some old things and passages in the Navy, for my information therein, in order to my great business now of stating the history of the Navy.

But the project was abandoned for lack of time. He did eventually publish Memoires of the Navy which deals with the Navy from 1679 to 1688. It was the only book Pepys wrote that was published in his lifetime, and the 2010 edition has an introduction also by J. D. Davies.

Pepys’ friend John Evelyn said in his obituary that “none in England exceding him in knowledge of the Navy”. This was no doubt true, but Pepys’ book is not quite what it purports to be. It was written as a defence of the policies pursued by Charles II and his brother James while he was in office at the Admiralty and as such is more an example of “spin” than of objective history. As Davies says, “the wealth of fact and figures is misleading, and far from being impartial.”

Davies’ own book on the other hand is strictly factual and would be an indispensible reference source for any regular Pepys reader. It is thoroughly researched, clearly organised, rigorous and detailed. I think Pepys would have loved it; in some ways it is the book he never wrote. I heartily recommend it.

J.D. Davies may be a serious historian, but he is also a novelist of entertaining novels about these times which include people you have met through the Diary. I have yet to read Pepys' Navy, but am currently enjoying his Kings of the Sea, and find his serious style also enjoyable. I also hear the pictures in Pepys' Navy are spectacular.

Having now read this book, it is the kind of reference book you dip into from time to time, I recommend it as providing an essential context to understanding Pepys and his time and what he was actually doing that made him so important to Kings, Dukes and Admirals. By the 1660’s, the Navy was by far the largest industrial enterprise in Britain, and its imports and purchases of masts, lumber, hemp, guns, and supplies, a major driving force in the economy and trade.

Sam was at the center of all this, and it explains his rise to prominence in the political world of Kings and Dukes as management by unqualified nobles gave way to technocrats like Sam, self taught as he was. Logistics wins wars. And he understood the logistics that enabled the experienced fighters like Penn and Monck to be successful. That is why they valued him.

The book also gives you a better feel for the forces leading to the crucial Anglo Dutch wars that dominated the period. And the reasons for seeming obscure and petty importance given to such things as salutes to the flag.

And you learn why the ships Carpenter was as important as the ships Gunner, and Ships Master. And why the Baltic trade, importing masts and hemp, was so vital.

I agree with you, but as we know, people are writing history, and not the fact that the author did not want to embellish everything a little. I still think that you need to run into several sources of information at once and then analyze for yourself