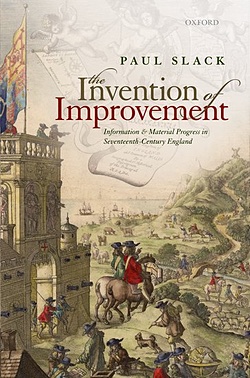 [Disclaimer: The author sent us a free copy of the book; we were under no obligation to say something good about it! Phil.]

The Latham prize is given biennially by the Samuel Pepys Club for the book that makes the greatest contribution to our understanding of Samuel Pepys, his times or his contemporaries. This year the award went to Paul Slack, Emeritus Professor of Early Modern Social History at Oxford University, Fellow of the British Academy and Principal of Linacre College, Oxford until 2010, for his book, The Invention of Improvement. (See at Amazon UK or US.)

What exactly does Professor Slack mean by “improvement” in seventeenth-century England? Why does he think that the term was “invented” at this time and how might this book inform the understanding of today’s readers of Pepys’ diary?

The scope of this book is clearly defined: it focuses specifically on the socio-economic history of England (rather than Britain or the UK) during the “long seventeenth century”. The origin of the word “improvement” is in agriculture. When you improve farm land, you increase its productivity by spreading lime or fertiliser, by drainage or irrigation, or by building walls and shelter for your stock.

But the word was to develop a deeper significance. It was Francis Bacon in his Advancement of Learning (1605) who first used the term in a broader sense, referring to the “improvement” of education. Professor Slack’s thesis is that the concept took hold and developed in England in a unique way. Gradually the word came to be applied to progress in any area of human endeavour, at a time in history when progress was to be seen everywhere: London after the Great Fire could be improved by rebuilding in better materials to an improved layout. Navigation could be improved through better maps and new ways of accurate measurement. Medicine could be improved through a better understanding of anatomy and the use of new instruments such as the microscope. Due to improvements in education there was a growing literate population with “an appetite for information, new consumer goods and novelties of all kinds” (p. 13). Improvement was the new buzzword and it both shaped and directed social change.

“In the meantime I have good content in mind to see myself improve every day in knowledge and being known.” Pepys’ diary, 11th March 1664.

This is not a book about the life of Samuel Pepys, but it does offer a new insight into the scientific, social and economic developments of the time and the intellectual context within which he was operating. If Restoration London was powered by a drive for improvement, then Pepys was certainly a man of his time. Throughout the diary years we see him reading widely and avidly. He collected an extensive personal library housed in bookcases of his own design. He continued to add to it throughout his lifetime and spent his retirement perfecting it until upon his death The Pepys Library was bequeathed to his Alma Mater, Magdalene College Cambridge. It is still there, in all its glory, its books organised by size as Pepys ordained, in their original mahogany bookcases.

He took lessons in Arithmetic and Navigation. He tried out all kinds of scientific instruments; an armillary sphere, a sextant, a pantograph (“parallelogram”), a watch, microscopes and telescopes. His interest was not just academic; by understanding Mathematics and Science he felt he could bring improvements to the administration and operation of the Navy. In 1673 Pepys helped to found the Royal Mathematical School so that young boys could learn the skills of mathematics and navigation in preparation for a Naval career.

Lively minds were not easily pigeon-holed in the seventeenth century. Pepys was surrounded by talented minds addressing themselves to a broad range of issues in the pursuit of progress. For example his neighbour at Axe Yard was Samuel Hartlib who published schemes of social, political and economic reform for the consideration of the authorities. Professor Slack points out that Hartlib’s translation of Comenius’ Pansophiae Prodromus, referred for the first time in print to “improvement”: “Properly used and improved,” the advancement of learning would bring “universal knowledge of all things’ and ‘serve to the improvement of our age”. (p. 99)

Pepys’ friend and fellow member of the Royal Society, William Petty, (who is mentioned in the Diary as the inventor of the catamaran or “double-bottomed boat”) published “tracts and papers…which transformed the character of English political economy. His focus was on the wealth and welfare of England and the use of political arithmetic to measure them.” (p. 116)

Indeed, Pepys engaged in conversation and correspondence with virtuosi in every field of knowledge including Isaac Newton, John Evelyn, Robert Hooke. He was an early member of the Royal Society and later its president. Pepys’ motto, Mens cuiusque is est quisque, the mind is the man, reflects a questing intellect, open to new ideas and experiences. It might be said that Pepys adopted the slogan “improvement” not just for himself but for everything he touched.

The historical sweep of this book is in fact vast, from the Reformation of the sixteenth century through to the Enlightenment of the 1700s and beyond. Its subject encompasses the entire socio-economic development of that period. It is therefore a challenging book but also a very rewarding one. For Pepys readers, it sheds new light on the social context and motivation of this man who did so much to improve not only himself, but also the English Navy and who, through the legacy of his writing and the Pepys Library, contributed greatly to the intellectual capital of the nation.