Skip to main content
Plague: Murder has a New Friend 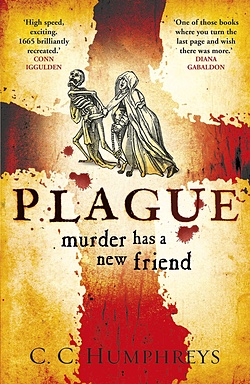 [Disclaimer: The author sent me a free copy of the book, which I passed on to Jeannine to review; we were under no obligation to say something good about it! Phil.]

C.C. Humphreys’ novel tells a story that could easily be found within the pages of Sam’s Diary. For those fact driven Diary readers looking for strict adherence to historical accuracy it’s worth putting that on hold to enjoy the ride. For those who have enjoyed Liza Pickard’s Restoration London: Everyday Life in London 1660-1670, revel in Sam’s “stories of the streets,” and love a fast paced mystery (albeit gory at times), this read will bring forth a cast of memorable characters trying to survive during the frightening Plague years of London.

Coke, a former Captain turned highway man, pulls over a coach with the intent to steal an exquisite necklace from the lovely lady inside. What he discovers instead is the gruesome slaughterhouse style murder of the driver and people inside the coach. As Coke grabs the dying lady’s necklace, she mouths the words “pale horses”. In his haste, Coke’s engraved pistol is accidentally left behind, which leaves him as the prime suspect for both the murder and the robbery.

The thief-taker (bounty hunter), Pitman arrives at the scene, finds the evidence left behind by Coke, and then destroys another key piece of evidence. Pitman, who struggles to support his large family, sets his sights to capture Coke for the bounty. The cat and mouse game begins between thief and thief-taker.

Meanwhile, the gorgeous actress Sarah Chalker finds herself unnerved by a stranger in her audience, who tries to give her an expensive gift and asks an unusual question about her background. Her overly protective husband John departs to track down this stranger to set him straight. John seemingly vanishes. While on the run the anti-hero Captain Coke finds himself drawn into solving this disappearance and sets forth to find the missing John Chalker.

Against the background of the Plague, beautiful actresses, Charles II’s rakish Court and the horrific Newgate Prison, these mysteries unfold and reveal a secret society of murderous religious fanatics. Will an unlikely alliance be able to solve the mystery and find the murderer?

Humphreys captured the streets of London, the struggle to survive and the seedy side of existence. Coke, his adopted son Dickon and the Pitman family were all likeable, street smart characters. I could easily see this as a “Captain Ferrers” style story unfolding within the pages of Sam’s Diary full of panache and swashbuckling style. I especially enjoyed the cameo appearance of our ‘always working’ man Pepys, which sets the stage for a high profile contemplated murder target. The fast paced novel proved a great ‘summer’ read for me.

Too bad there is no ebook version.