Occasionally over the past year or two people have mentioned to me that the @SamuelPepys Twitter account features in a live show by the British comedian Bill Bailey. Last week I was finally able to watch the show – Larks in Transit – as it’s currently available on BBC iPlayer for the next year. 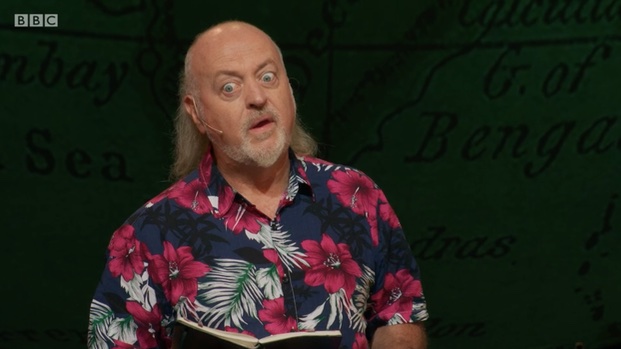 For posterity, and those who aren’t able to watch it, here’s a transcript of the small section devoted to Pepys (which starts at 29:48):

I look for the little sort of glimmers of hope and sometimes you find them, right? Someone has taken the trouble to set up a Twitter account in the name of Samuel Pepys, the 17th century London diarist. The Twitter feed is just genuine extracts from Pepys’s diary, which is a beautiful thing.

But, of course, this being Twitter there’s a lot of people who have never heard of Samuel Pepys so they just think it’s some old bloke talking in a weird way. So you get these fantastic exchanges, like this one. This is an entry from 1665:

“I was mightily troubled with a looseness, and feeling for the chamber-pot, there was none, I having called the maid up out of her bed, she had forgot I suppose to put one there; so I was forced in this strange house to rise and shit in the chimney twice.”

And somebody’s replied, “Been there bruv. Been there.”

So, if you know of anybody called Adam Hodgson, don’t let them stay in your spare room, that’s my advice.

I’m not sure if using a different surname (it should be Hodgkiss) is intentional or not.

I must admit, I don’t think I’ve ever noticed anyone confusing @SamuelPepys for a living person, and I must have read 95% of the replies to the account over the years. But, still, that’s a very nice bit.